The history of Scottish Kilts goes all the way back to the sixteenth century. Although kilts are traditionally associated with Scotland, they are also long-established in Irish culture.

Kilts are worn in both Scotland and Ireland as a symbol of pride and a celebration of their Celtic heritage, yet each country’s kilt has many differences which we’ll explore in this post. 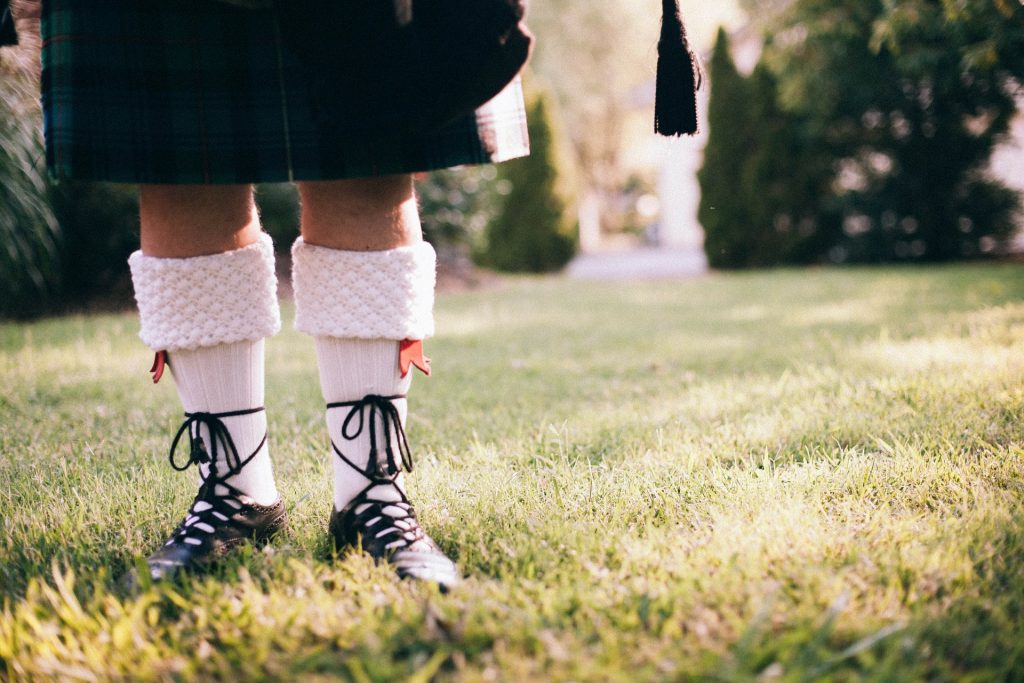 The Scottish kilt dates as early back as the sixteenth century. This was called the Feileadh Mor, and was a long, thick stretch of fabric that draped over the wearer’s shoulder as well as acting as a kilt.

The Feileadh Mor was originally designed as a protective piece of clothing to shield the wearer from the tempestuous Scottish weather. It was not until the early nineteenth century when they became a symbol of Scottish identity and traditional Scottish dress.

After the Jacobite Risings in 1746, the government banned the wearing of Kilts and Tartan as they were afraid of further revolt and uprisings by Scottish clans.

We were introduced to the modern kilt, complete with pleats and buckling, in the late nineteenth century. This is the kilt we all know and recognise today. 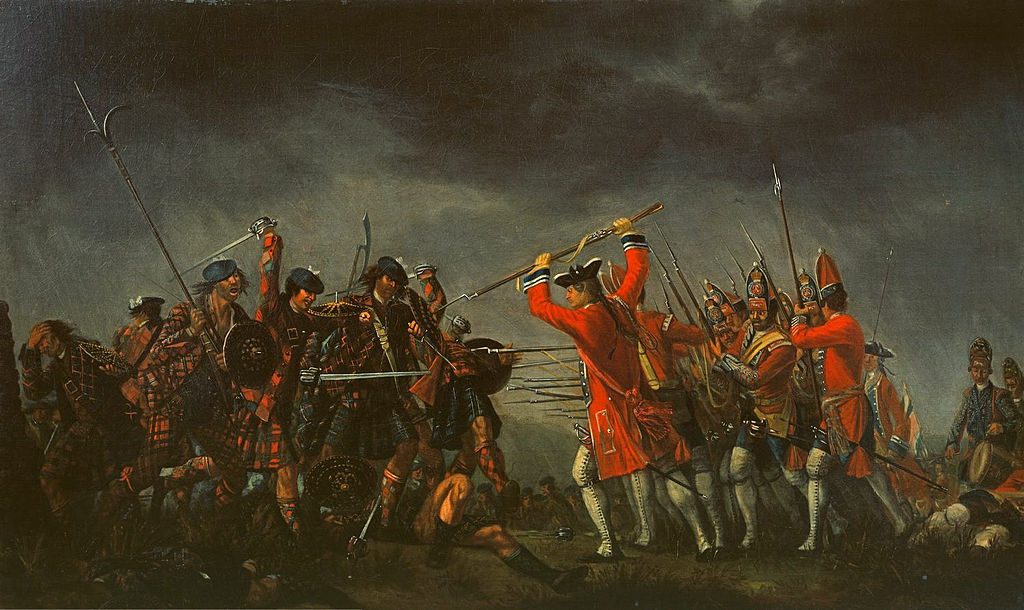 Many believed that the Lein-croich was the first version of the Irish kilt, however, this was a long tunic in block colour and is not a traditional Irish kilt.

The Irish national tartan was introduced as a symbol of Gaelic tradition during the rise of Irish nationalism and as a response to the ongoing anglicisation of Ireland.

The traditional kilt which is associated with Ireland is the Saffron Kilt. The Saffron Kilt is mustard yellow in colour, often with shamrock appliques down the pleat.

Saffron Kilts were first worn by the Irish military in the British Army during the twentieth century, and it’s the most widely worn kilt in Ireland today. Similarly, the Feileadh Mor was also worn by Scottish troops on the battlefield. 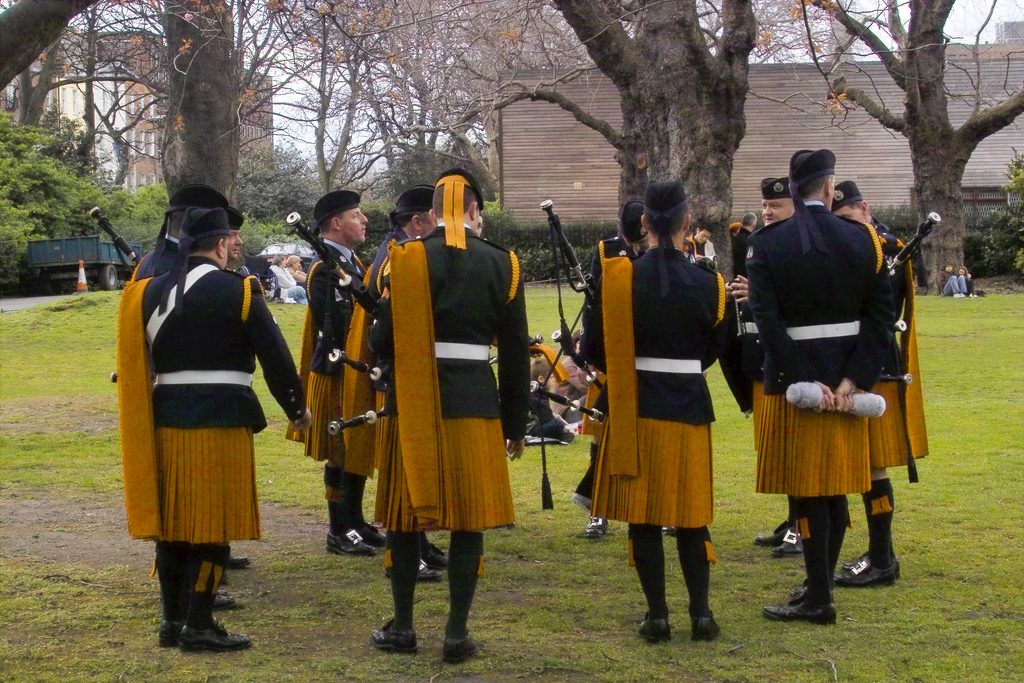 This is where the Scottish and Irish kilts differ the most, as the tartan in which the kilts are made have very different origins and meanings.

Scottish tartans are a representation of a Scottish clan, and each Scottish family has their own tartan, distinguished by their surname. There are over 25,000 registered Scottish tartans.

However, Irish tartans are designed to represent the districts and counties of Ireland. For example, if you originated from Cork, you would wear a kilt made with the Cork County Tartan.

When looking at what Scottish and Irish Kilts are traditionally worn with, there are many similarities between them.

Scots often wear their clan crests pinned onto their tartan on formal occasions.

In Ireland, it’s not as common to have a crest of your family pinned onto your tartan as it is in Scotland. Often, Irishmen pin a shamrock crest onto their tartan or leave it bare.

The Sporran is the pocket attached to the front of a kilt, and this is a traditional accessory to both Scottish and Irish kilts.

There are no distinct differences between Irish and Scottish sporrans. However, you can buy Irish sporrans, complete with shamrocks and green detailing. Likewise, many Scottish sporrans incorporate Scottish thistle or traditional celtic designs. 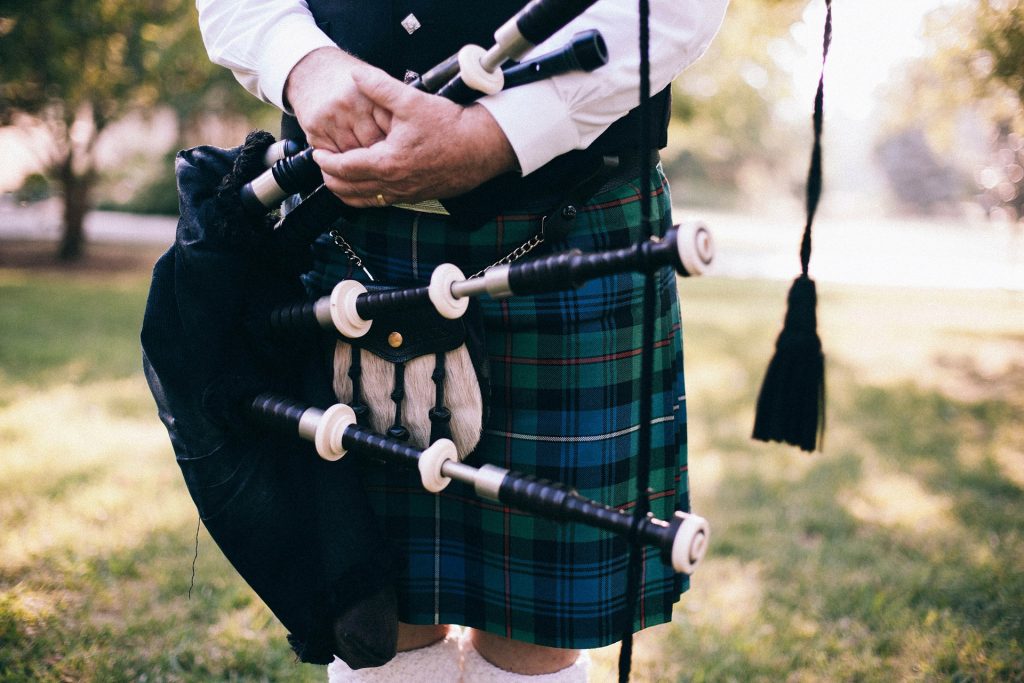 Both Irish and Scottish kilts are worn with different jackets for formal and casual occasions.

Similarly, the Brian Baru jacket is the Irish pick for formal dress. The Brian Baru is very similar to the Prince Charlie jacket, and would also be worn with a bow tie, waistcoat and wing collar shirt for formal occasions.

The Argyle Jacket is a less formal Scottish jacket, that would be suitable for daytime and eveningwear alike. The Argyle has ornate buttons on the pocket flaps and cuffs. However, these are not on the back of the jacket like the Prince Charlie jacket. The Argyle will usually be worn with a standard collar shirt and bow tie.

The Irish equivalent of the Argyle is the Kilkenny jacket. This can be worn for both formal and casual occasions. The Kilkenny is structured like a standard suit jacket and has ornate buttons dressing the front of the jacket. This should be worn with a standard collared shirt, waistcoat and necktie, and is often a shade of Irish green.

The Glengarry is the traditional Scottish hat worn with full Highland dress. The Glengarry has a toorie (pom pom) on top, and a chequered red and white design on the side.

Both traditional dress in Scotland and Ireland includes wearing knee high socks with ribbons that match the colour of your tartan, with Ghillie Brogues on the feet. These socks are usually cream, although the Irish military wears black socks with their Saffron Kilts.

It’s also a tradition in Scotland for a little knife called a Sgian-dubh to be placed inside the sock on the side of your dominant hand.